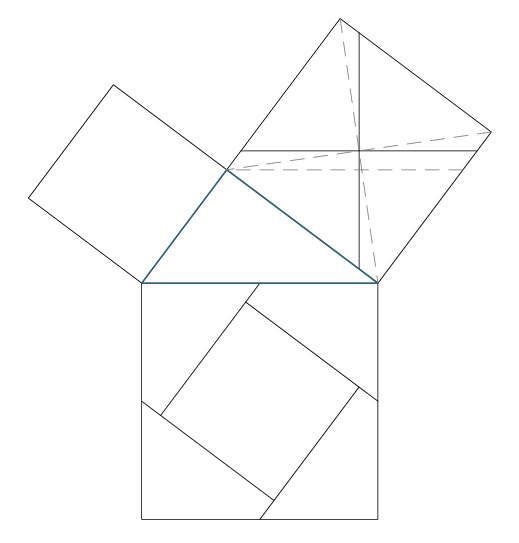 org-babel-eukleides allows eukleides code to be executed directly from within embedded code blocks in Org mode documents. These code blocks can draw pictures that are generated from eukleides and can include output as embedded graphics when the document is exported.

The following provides instructions and some examples of eukleides usage. Since babel is simply allowing native code to run inside of Org mode, all eukleides documentation is applicable and valid. 1

To get eukleides up and running, you need eukleides to be available in your system. You will need a program to convert Encapsulated Postscript (EPS) files into PNG. Strings to convert files using sam2p or pnmtopng are supported, but other types of converters like ImageMagick can be used.

There are two strings being passed, the first one is the original file name and the second one is the converted one.

As of Org mode 7.01, babel support is included and there is no need to load it via .emacs. All you have to do is enable specific language support with the following in .emacs:

To run eukleides and produce a resultant image (or to produce any result from babel code blocks), simply move one's cursor anywhere in the code block and press C-c C-c (Ctrl+C followed by Ctrl+C) and type "yes" in the minibuffer when asked about executing the code.

Babel block headers are used to pass various arguments to control the results of the executed code. The complete list of header arguments is covered in the Org mode manual; for now, some options frequently used for eukleides are:

As stated earlier, the full eukleides documentation can and should be consulted as the official reference, but it might be helpful to lay out some common syntax here as a quick reference. Any of the commands typed in code font below should be assumed to reside in a babel code block (between #+begin_src eukleides and #+end_src).

Eukleides is a programming language that contain a complete set of logic constructs, but its main purpose is to generate pictures, commonly seen in geometry texts. This is for the most part a two part process:

Let's go through this example:

There are two shapes being drawn in this example:

Upon the execution of this block using C-c C-c the file name will be stated in #+RESULTS: containing the resultant picture.

As mentioned, eukleides is a complete programming language, but support for results is not available from Org mode at this time being that its primary function is to draw pictures. But the following can be used to write text or other items to a file as part of the execution of an eukleides script.

In this example the a file named "myfile.txt" containing "Hello" and 1,2,3 is written.

Named procedures and tables are not supported at this moment. 2

Eukleides is able to support text results and variable processing, but it is not available in this release of the Babel plugin. The code will be enhanced in the future.